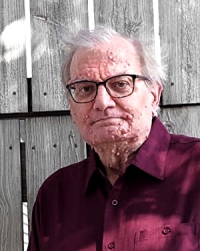 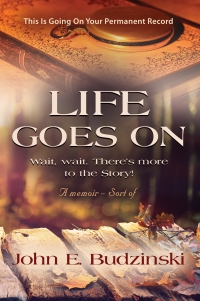 John E. Budzinski always loved stories—reading, hearing, telling, and writing them. He humored friends (often making them cringe) with his off-the-wall imagination that too him into a dream-like and fantasy world. John was never afraid to try something different and to put that imagination on display.

John wasn’t a bad student, and he always did his work. However, he was selective in his class participation, rarely raising his hand to answer a question, even when he knew the answer. (Albeit, he did find selective time to disrupt the class and take them off on a wild tangent with wise-guy comments.) Early on he exhibited a writer’s courage, though he received little encouragement in doing so. The first time happened in eighth grade.

The class was given a writing assignment. John wrote about the life of a baseball. The teacher read two of the class’s essays aloud without mentioning the writer’s name, the second one being John’s. As she got to the second paragraph, several of John’s classmates looked at him, shaking their heads. They knew this bizarre diatribe had to be his. The teacher smiled at John when she finished reading.

John did not pursue writing with much vigor until he tried to impress a college girlfriend’s father, who was News Editor of the local paper. Many fathers think of their daughter’s boyfriends as jerks, and John wanted to dissuade this line of thinking. He wrote some op-ed pieces hoping to show said father that he may be a jerk, but at least he was an intelligent jerk. The ploy did not work, and his girlfriend’s father still thought of him as a 25-watt bulb in a 100-watt world.

The experience did not deter John. He wrote op-ed pieces for his local paper and spent five years writing a column for a weekly paper in New Hampshire. His work has appeared in the Boston Globe, the Quincy, MA Patriot Ledger, the Worcester, MA Telegram & Gazette, The Connecticut Post, and the Waterbury, CT Republican American.

Budzinski had a forty-year career in Supply Chain Management, working for several high-tech, defense, and pharmaceutical companies. He retired early to write books and chase down several items on his personal bucket list, including pursuing a Ph.D. His writing takes shape from his mantra, “Good stories are good stories, especially when they help readers remember theirs.”

John grew up in the Lordship section of Stratford, Connecticut. A graduate of Virginia Commonwealth University in Richmond, he studied at Northeastern University in Boston, Temple University in Philadelphia, and others. John E. Budzinski is an ardent traveler and accomplished photographer. He lives near Iowa City, IA, a UNESCO City of Literature.